Sinclair computers: the affordable equipments of the 80s

By the end of the 1970s, few visionaries wanted general purpose computers at homes. Steve Jobs (founder of Apple) and Bill Gates (founder of Microsoft) are the most well-known but we will talk about Clive Sinclair, an English entrepreneur whose main priority was to launch original products with low cost to the market. He achieved that his computers were affordable for a big part of the public and thanks to that, a lot of people could have access to computers.

Clive Sinclair: his companies and microcomputers

In July 1961, Clive Sinclair founded Sinclair Radionics. The company developed and sold electronic products with an emphasis in its small size and low price. They started building audio components but without leaving aside other possible deals relating with electronics. In this way, some products like Sinclair Executive calculator appeared. It was the first pocket calculator in the world. There were also the electronic wrist watch Black Watch or the portable television Macrovision.

At the end of the 70s, the company went through a harmful economic situation. Some of their products did not make good sales so the company was in part nationalized to avoid disappearing. With that, Clive Sinclair lost most of the control. 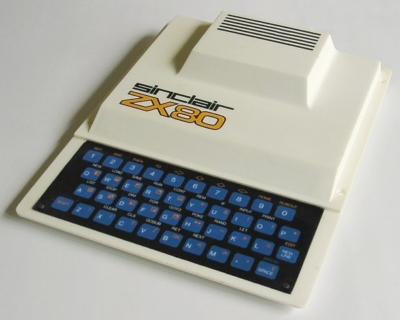 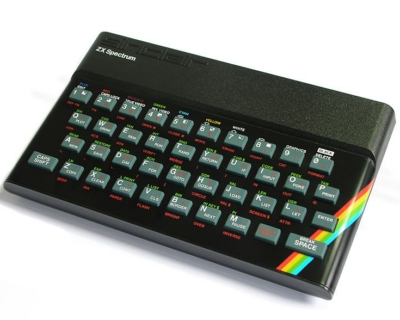 In July 1977, Clive Sinclair founded “Science of Cambridge”. It was a company were products not accepted by Sinclair Radionics were developed. In 1978, one of the projects launched, the Microcomputer Kit 14. It was a rudimentary microcomputer aimed to those computing amateurs and it was well received due to its low cost. The following success was in 1980 with the ZX80. It was a small computer with barely 1KB RAM but its design and low cost (£100) allowed people to get into the computer’s world. Besides, it was easy to use because it used BASIC language. These achievements took Sinclair to put more effort in microcomputers. So he finally quits Sinclair Radionics and puts Science of Cambridge developments into microcomputers. Then he changed the name of the company to Sinclair Research. In 1981, they launched the ZX81, an improved version of the ZX80; and in 1982, the ZX Spectrum with 48KB which was the domestic microcomputer number one in sales in Europe in the 80s.

Despite improving and successfully commercializing the ZX Spectrum+ in 1984 and the ZX Spectrum 128K in 1985, there were some unsuccessful projects like Sinclair QL or the electric car Sinclair C5. These made Sinclair Research not profitable and in 1986, it was bought by Amstrad Consumer Electronics, one competitor company. They launched ZX Spectrum +2 and ZX Spectrum +3 and then they stopped selling Sinclair products. Since then, Clive Sinclair kept on undertaking some projects with more or less success. In 1988, he created the portable ZX88, with Cambridge Computers but he did not get the previous success.

If you click one of the buttons below, you will see how a word in BASIC language is written. In this way, they saved RAM because the language sentences were well written and it was not necessary to check for grammatical mistakes. Check the link to the BASIC manual and try to make some program.

Nowadays, among the European Union countries, there is a free merchandise circulation. This was not like that in the 80s when domestic computing began to excel. The main computer manufacturers were in the United Stated or the United Kingdom so the devices were not able to work with Spanish characters like “ñ” or the accents. To force the manufacturers to introduce those characters in those devices that were going to be sold in Spain, the Spanish governors established by law, a high tax on computer exportations that did not have Spanish characters.

Investrónica was the official Sinclair Research distributor in Spain and software producer for ZX Spectrum. They were in charge of designing a new ZX Spectrum adapted to the new national normative. It was not only to add the “ñ” to the keyboard but to reprogram the ROM to translate the messages into Spanish. Also, because of the users’ complaints, they changed the rubber keyboard for a harder one. The result was the ZX Spectrum +. In 1985, Investrónica proposed Sinclair to improve even more the ZX Spectrum and he designs the ZX Spectrum 128K which had more RAM, improvements in the BASIC interpreter and improved sound chips. Investrónica made the job and in September 1985, they launched the first domestic microcomputer in Spain.

In 1986, Amstrad Consumer Electronics bought Sinclair Research and it has its consequences despite the good work. Investrónica abandoned the development and distribution of Sinclair products because the official distributor would be Amstrad España. Now, Investrónica is a company dedicated to the design, build and commercialization of computer products and electronics. It even has a computer brand: Inves.

Sinclair tried to bring informatics into general use making small, simple and cheap products. That allowed young people willing to learn or work, to go from amateurs to be referents in the global industry of the video game in the 80s. Nowadays, it is relatively easy to get some software on the internet but it was very difficult in the 80s to find software for microcomputers. Besides, if we add that there was a manual with the computer, we get a lot of young people interested in developing their own games to play or play with friends. They learned to program with lists and magazine courses, encyclopedia or books with heaps of examples.

The ZX Spectrum was the first experience with computers for a lot of people and the majority of professionals started with it. But in the 80s there were people that with work and dedication created the Spanish video game industry only surpassed by the English one. The “MicroHobby” magazine was a referent at that time because beside of talking about video games, it contained programming courses and the source code for games that readers created and were sent to the magazine. While typing, readers got into the world of programming and creation of videogames. This time gets the name of “the golden era of Spanish software” thanks to the quality and quantity of games developed by new companies like Made in Spain, Zigurat, Topo and Dinamic among others.

BASIC is a simple language. Practically all commercial games were made in assembly language which was faster than BASIC but more complex due to its difficult syntax and you had to know the intern functioning of the machine (registers, memory maps, etc.). The assembly language is a low level language. That is, it is a language that depends on the machine where it works. This provoked that make a version of a ZX Spectrum game for another microcomputer a difficult task, but not impossible. In Spain, the most popular one was ZX Spectrum, besides, it was the more limited computer at that time so a lot of games were programmed in ZX Spectrum for ZX Spectrum and then they were “carried” to other superior computers but not using these superior characteristics. Each company improved each time its way of work and it got products with better quality, increasing its productivity like reusing routines among games.

Nowadays, there are still people who develop games for ZX Spectrum and other computers from that time but in a different way like they did in the 80s. For instance, the game Phantomas en el Museo, by Mojon Twins (2012). The creator shares publicly the source code of the game. To begin with, he uses a PC to make the programs but an emulator to test them. Like that, it was easier to debug programs and even though it is still used an assembler for some critique routine, it uses a C cross compiler, the Z88DK, with some LIBRERIAS for the use of graphics and even a framework called “la churrera” that simplifies some tasks in the process of the development of the game. When the game works fine, it is recorded in an extern device, then it is tested in a real computer and if it is all good, it is done.

Now, the video game industry looks like the one in the 80s because the complexity and power of the current computers require a high degree of professionalism, team work and creativity. One of the people who knows better the difference between the video game industry of the 80s and the current one is Victor Ruiz, founder of FX Interactive. The company is still running and it’s the creator of games like “Imperium” or “Runaway”.