Home computers arrived to Spain in the 80s but they were not neither the Apple I nor the IBM 5100; in Europe the hegemony was in the hands of Amstrad. It was a time in which videogames just existed in arcade games in game rooms. Amstrad was used just as an emulator of these machines, with the limitations that emulating these games with 64 KB meant – which is much less than the images we work with today.

Although microcomputers were almost unknown, all teenagers wanted one of these machines and they had to convince their parents to spend 60.000 pesetas (360 euros) on it.

To achieve this we were not alone: we had the help of advertising.

As we can see in these advertising campaigns, this computer was showed as a machine from the future willing to help adults both in the office and at home, and for young people was an excellent fellow student too.
Any resemblance to reality is pure coincidence, computers had nothing to do with those which appeared in advertising.

The first thing we did was to assemble the computer, something simple since it just had three cables which fit just in three positions.

The home screen, had no windows, no buttons and no graphic interface, just a couple of lines of information and a blinking cursor.

We were afraid of breaking it and we used to call our neighbor, who already had one, so he or she could explain us how it worked. Our neighbor just told us where to insert the games and which was the best of that moment.

With all this information we turned off the computer and we went to the fnac of that time (the gas station of the town) to buy our first game. My first videogame was the fantastic Game Over and it cost me 500 pesetas (3 euros). 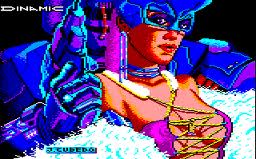 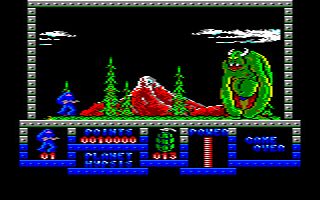 I had the Amstrad CPC 464, with color, and the storage medium was the cassette.

When we already had the tape with the game, we introduced it, pressed Play and waited. Nothing happened, so we had to call again our neighbor. What it came next was an instruction of BASIC: RUN” (also CTRL+ENTER); the computer answered Press PLAY then any key: So we pressed PLAY and then the space bar (this was our first conversation with the computer and it was fantastic).

Cassette tapes were classified according to its duration: 45, 60 or 90 minutes; in this case the Game Over had a 45 minute tape each for face. The charge had a speed of 1200 bauds. In order to charge a game like this which occupied 57 KB, which are 466.000 bits, at 1200 bauds per second, 6 minutes and a half were necessary to hear these sounds.

If we wanted to charge for example a megabyte we needed 116 minutes.

Games were not economical, prices were between 500 to 3000 pesetas (3 and 18 euros), a significant value for the economic situation in Spain at that moment. For this reason pirated copies were everywhere. Even radio stations emitted the game in order listeners could recorded them, but this used to fail.

When the game was charged and ready to be used our feelings were indescribable, it was a new way to play at home and we had a lot of fun.

We spent thousands of hours playing, until be on the verge of a wrist sprain due to the Q-A-O-P-Space key combination. Generally, after being so many hours playing, people turned off the computer, but some, as me, continued a little more. We had curiosity about the new machine and we used to ask ourselves things such as: why have we written RUN”?Does it work in small letters?

Answers to these questions were found in the book that came with the CPC.

In the manual we could find basic notions about the programming language of BASIC and produce our first codes:

With this type of codes which identified odds and evens and by executing SOUND, DRAW and PLOT we immersed in the programming world, although this code had nothing to do with the professional codes of Amstrad videogames. Most complex codes were on magazines as Micromanía (publication that still remains). Inside these magazines we could find programs in BASIC to run them in our computers.

As we can see in the video, the evolution of this type of games was huge. But when Amstrad games were similar to those of today, Europe was invaded by other machines that could produce better quality videogames, the video game consoles. The first relevant were Sega Master System, Nintendo Entertainment System(NES) or Sega MegaDrive. On the other hand, compatibles PC made their appearance in the market, they came from IBM PC. Due to that, IBM PC decided to create computers without hardware used license, so hundreds of companies started from the copy of IBM PC computer components in order to create their own models. These computers were called IBM compatible. One of the first compatible computers was the Amstrad PC1512, created in 1986.

The arrival of these computers and video game consoles was the end of Spanish software companies, protagonists of the Golden Era of Spanish Software, leaders in all Europe for its development capacity in creating videogames and foreign games adaptation quality. Indescomp, Zafiro Software, Topo Soft, Gamesoft, Delta Software, Animagic, CompuLogical, Dinamic, Iber Soft, Iron Byte, Positive, Opera Soft, Zigurat, New Frontier and Sortrapa are the names of the companies that exalted the Spanish software to the highest level.

All of them have counted with great computer technicians internationally recognized. It should be emphasized two of them Dinamic and Indescomp.

Indescomp was the company, guided by José Luis Domínguez, which was in charge of the distribution of the first Amstrad CPC in our country.

On the other hand, Dinamic, guided by brothers Ruiz and Santiago Morga, was the developer of the most successful titles for Amstrad CPC and Spectrum.

Dinamic, as well as other software companies, functioned thanks to people who worked on it.

They were young and motivated by the pleasure of learning this new technology, without many resources they were able to design a lot of codes that in many cases were impossible to debug and this required much more time than the generation of the code in itself.

But despite the efforts of Dinamic to adapt to the new times it did not survive. However, this did not stop its creators, who began a new adventure by creating FX Interactive, company, which nowadays is internationally recognized.

Currently, Amstrad followers are not abandoned at all, there are places online where we can enjoy as we used to do.

In the first place we have emulators which make us feel almost the same sensations that we had with our CPC Winape, CPCe, JavaCPC, WinCPC, Arnold, Caprice32, CPC Emu, are some of the emulators that we can use. They are of great quality, useful, free and some of them as the Caprice32 are free code, so you can adapt it to your preferences.

Secondly, regarding the software, there is a great movement online to recuperate the titles we had. For example, in YouTube we can find tutorials which show us how to run games in our old computers which a modern mp3 player.

There are also people who wanted to establish a business model. That is the way ESPSoft started, which currently dedicates to produce videogames for Amstrad and has created games as TOTEMS: Columns CPC Two.

CPC computers pushed some of us to the world of informatics and it is pleasant to know that the 80s spirit still remains. Nowadays the British company Amstrad is not related to computing anymore, it is dedicated to produce components for BSkyB company.