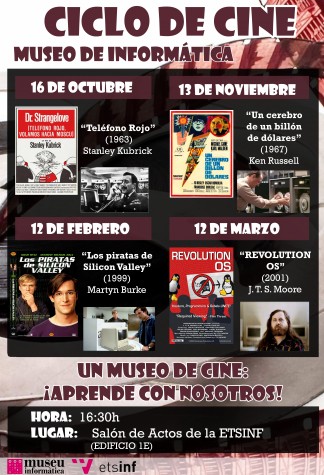 The Museum of Computing of the Escuela Técnica Superior de Ingeniería Informática of the UPV (ETSINF) has organized a new proposal to deepen the evolution of its discipline. Over the next months it has programmed the cycle “Un Museo de cine” with feature films set on the 50s, 60s, 70s and 80s, which collect part of the recent history of computing.

The aim is to present an activity which brings any kind of public closer to the different aspects of computing, in an entertaining way, through the cinematic language.

The feature films will be projected at Salón de Actos of the Informatics School at 16:30h. Each session consists of a presentation of the film and its relation with computing, the projection in itself and the pooling, once it has finalized.

The cycle consists of four feature films which deal with topics related to:

3. The origins of Apple and Microsoft.

4. The development of the free software.

From October to March it is expected the projection of Dr. Strangelove or: How I Learned to Stop Worrying and Love the Bomb, Billion Dollar Brain, Pirates of Silicon Valley and Revolution OS. Historical computers, the cold war, spies with technological knowledge, the genesis of the multinationals that nowadays govern a large part of the market and the origin of the open source are some of the issues that will be discussed during the session.

If between your passions are cinema and computing, you should attend this unique exhibit at ESTINF.

Link to the cycle poster: http://goo.gl/kjQ3qU